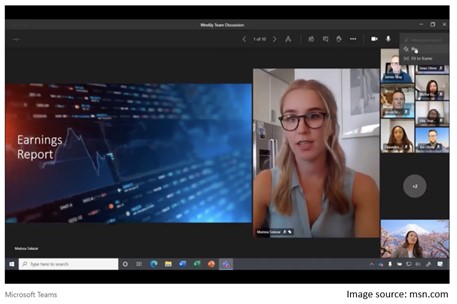 Microsoft Teams has just issued a new year blow to Zoom with a major new feature.

There is no doubt about it—2020 was the year of the video conferencing service, and Zoom and Microsoft Teams were at the forefront. In 2021, this battle shows no sign of slowing down. Microsoft Teams has already announced a new feature that should be coming soon—Dynamic View.

First revealed on LinkedIn by Microsoft product marketing manager Remco de Kramer, the new Teams feature means that the speaker and presentation videos are the same size and can be viewed side by side.

“The gallery is optimized automatically or controls are given to personalize the view,” he explained. Currently when watching shared content in Microsoft Teams, the speaker’s video is small.

As reported by WindowsLatest, Windows 10 users should be getting the Dynamic View feature in March 2021. The new Microsoft Teams feature builds on Together Mode launched last year, which is intended to make meetings feel more personalised.

Microsoft knows that your video conferences can sometimes feel disjointed, and Together Mode sees Teams feel like you are in one room with your colleagues.

Microsoft also launched a bunch of new Teams features in December. In a blog this week, Microsoft outlined all the capabilities it launched last month, including virtual breakout rooms to allow you to divide your meeting into smaller groups for discussions and brainstorming. MORE FOR YOUiOS 14: Here’s Why There’s An Orange Dot On Your iPhoneFacebook Users Have 3 Superb Reasons To Quit In 2021How To Use Signal: The Brilliant WhatsApp Alternative

Microsoft also confirmed that extensions on its live events limit are now available until June 30 2121, as virtual events continue amid the pandemic. Meanwhile, there are some new calling features in Teams including live captions for one-to-one calls to make it easier to follow what’s going on.

Before last year, Teams was a poor second to Zoom, but now the platform is adding a tidal wave of new features its user numbers are surging. This week, an article in the Financial Times saw the firm’s CEO Satya Nadella describe how Microsoft’s focus is now shifting towards making Teams a channel through which users access its Office apps.

Recently-launched Advanced Communications sees Microsoft integrate Teams into its other services, but Zoom is also playing for this market with its recently launched Zapps, the addition of end-to-end encryption that Teams doesn’t have, and a possible new email service.

Only one week into 2021 and the video conferencing battle is already ramping up. It’s going to be an interesting year.